Will robots kill the market economy? 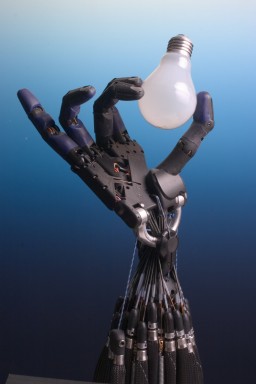 Photo by Richard Greenhill and Hugo Elias of the Shadow Robot Company via Wikimedia Commons.

I recently attended the Master Investor conference, held at the Business Design Centre in Islington. One of the speakers was the highly successful investor Jim Mellon who gave a succinct summary of world markets as they stand today. But what particularly caught my attention were his remarks towards the end of his speech, when he touched upon the effects that robotics will have upon the modern world.

This is apparently to be the subject of his next book, and he did make it clear that he had yet to map out all the implications. However his central argument is that the increasing use of robots in factories (particularly in developing countries), and the imminent arrival of more intelligent machines that can – for example – drive cars, will inevitably lead to unemployment at levels far beyond those we are experiencing in the current recession. As Mellon pointed out, when £25,000 will buy a robot that doesn’t need sleep or holidays, never makes a mistake and will never draw a pension, why continue spending similar amounts every year to employ a human being who does and will?

Such inexorable economics will initially lead to a loss of jobs amongst the less skilled on the factory floor, particularly in countries like China and India where so much of our goods is made, and job losses will increase as robots – and associated technologies such as 3D printing – get cheaper and more reliable. Robots are already replacing check-out assistants in supermarkets, and this will inevitably extend through the retail sector as they get more intelligent. Cars that are better drivers than ourselves are almost upon us, which is bad news for anyone who earns a living as a taxi, bus or lorry driver.

Mellon sees this as splitting society into company owners and those involved in the robotics industry, who will do very well from such developments, and those who will no longer be able to work. He dubs this latter group ‘foragers and grazers’ and suggests its members will survive on welfare benefits, paid for through ever-increasing taxation of those fortunate enough to benefit from the new order.

However I would suggest that the consequences will be far more dramatic. As more and more workers are replaced by robots, fewer and fewer people will have disposable income to spend on the products they produce. Jobs for manual workers and those involved in mundane administrative tasks will be the first to go, followed by those involving more complex tasks such as driving and low level decision-making. However there is already talk of robot teachers, and as machine intelligence increases, few jobs will be safe. As Mellon pointed out, computer scientist Ray Kurzweil has predicted that computers will become more intelligent than humans in around 30 years’ time.

Demand for goods and services will drop, and while the lower cost of production will allow prices to fall, the inevitable consequence will be a shrinking economy. One of the main reasons for the economic growth that we’ve enjoyed over the past century or so has been the expansion of an affluent middle class with the means and the inclination to consume. Take away the jobs and that inclination will disappear. Tax revenue will decline just when it is needed most, which will lead to increasingly disconnected societies.

One particular watershed will be crossed when unemployment exceeds 50 per cent and we move into a position where the majority are suffering as a result of these developments. There are plenty of free markets that thrive in non-democratic states, but the transition from the kind of open democracy that we currently enjoy is likely to be accompanied by civil unrest, at the very least.

However the real problem is that these technologies break one of the fundamental mechanisms that allows our market economies to function, namely the link between work and pay. You work, you get paid, and with your pay you purchase goods made by other workers. You also pay taxes, and those taxes generate sufficient revenue to pay for the basic needs of the unemployed until they find a job. Market mechanisms can cope with a small proportion of unemployed workers – indeed a certain number are necessary to prevent wage inflation – but they won’t be able to cope with an increasing number who are unlikely to ever find work again.

The irony is that such technologies were meant to benefit mankind, removing the need for us to perform arduous, repetitive and often dangerous tasks. And there are other similarly transformative innovations on the way. Ray Kurzweil pointed out in a recent TED Talk that solar cells will be able to satisfy all our energy needs cheaply and efficiently within the next 15 to 20 years. In another TED Talk, the extraordinary Taylor Wilson talks about small low-cost nuclear fusion reactors that could do much the same. Unfortunately, it looks as though these technologies will highlight a major problem in the way we currently operate our economies which, unless changed, will restrict the benefits to a small elite.

This is not an argument for socialism which has already demonstrated far too great a propensity for descending into corrupt dictatorship and ignoring basic human rights. However, as we move into this brave new world, we do need an economic system that can cope. Robots, 3D printers and the like can deliver a better future for us all, but only if we rethink the way in which their fruits are distributed.

This entry was posted in Politics and tagged economy, robotics, robots. Bookmark the permalink.

One response to “Will robots kill the market economy?”