The link between storytelling and Gestalt therapy

I’ve just finished reading Into the Woods: A Five Act Journey Into Story by John Yorke, a profound and detailed study of the underlying structure that is common to all stories, whether told through film, television or print.

To recap, the storytelling process starts by introducing the basic setting and the main character, the protagonist whose story it is. The protagonist is then presented with a problem or a challenge which he or she may at first refuse, but will eventually have to face and take steps to solve or overcome. His actions may bring some success, or make things worse, but either way they bring ever bigger challenges until he overcomes the final crisis and gets the girl/boy or vanquishes the monster and is able to return to continue on his way, enriched by the experience.

Yorke is not only concerned with the details of this underlying structure, but also with the question of why it should be so universal. His conclusion is that it reflects the way in which the human mind works as we try to find order and reason in the world that we inhabit. It reflects the basic cause and effect, action-reaction that we see around us, and helps us overcome the challenges that we face in everyday life. 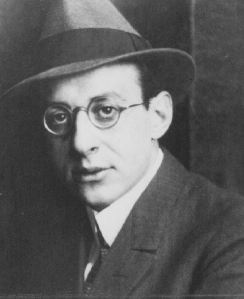 Fritz Perls, whose ideas led to the theory of Gestalt Therapy.

However it seems to me that the structure also reflects the ideas of Fritz Perls; ideas that became the basis of Gestalt Therapy as described in his book of the same name which was published in 1951. The German word ‘gestalt’ can be literally translated as ‘shape’ or ‘form’, but in this case is taken to represent the state of the conscious mind at any particular moment – a state that is continually changing in response to desires and emotions bubbling up from the unconscious, and sensual stimuli coming in from the outside world.

The concept can best be understood by looking at what happens in response to a simple stimulus, such as a feeling of hunger. The mind is initially in a state of rest, alert to the world around, but not focused on anything in particular. It is then disturbed by the feeling of hunger, which results in a desire for food. The mind starts to focus on satisfying the desire, searching the immediate surroundings, and making plans. Is there food in the fridge? Do I have enough money for a trip to the supermarket? And so forth. Anything that can help the search comes to the forefront of the mind; everything else recedes into the background.  Feelings of excitement and anticipation follow, which may initially be frustrated but return with increasing force as a solution becomes apparent. Obstacles are overcome and concentration increases until all of the mind’s energy and attention is devoted to the task, and then finally there is elation as the food is found and devoured, followed by feelings of satiation and satisfaction as the food is digested. Once this is past the gestalt returns to a state of rest, ready for the next stimulation.

There is an obvious parallel between this progression and the three/five act structure of a story, particularly if you replace the desire for food with a need for love or safety, or the awareness of a threat. In Perls’ view, this progression represents the healthy approach to the various problems that we encounter in the course of our lives. However, as a psychotherapist, he was more interested in the ways in which the progression can become disturbed, resulting in an unhealthy, neurotic response because the individual is unable or unwilling to accept the situation, or do what is necessary to resolve it. The gestalt becomes ‘fixed’, and the individual either partitions it off as ‘unfinished business’, or starts to view everything through the same distorted lens, responding inappropriately to new stimuli as they arise.

So perhaps one fundamental reason why the three/five act structure is so important is exactly because it mirrors the healthy response to the problems we encounter on our journey through life. Stories have long been used to convey the wisdom of one generation to the next, and their underlying structure may be the most important lesson of all.

This entry was posted in Writing and tagged Gestalt, storytelling, WPlongform. Bookmark the permalink.